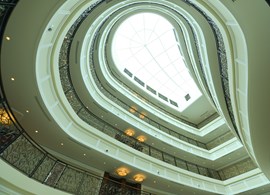 In addition to the unlimited and scrumptious selection of food, the sounds of traditional Oud music, and the opportunity to catch up with friends and colleagues, staff members also enjoyed the opportunity to witness the excitement on their children’s faces, as ASGC celebrated the outstanding academic achievements of many of them. This year the ASGC Academic Excellence Award was introduced to encourage children of staff to strive for excellence in their academic careers. These high achievers were awarded the Excellence Certificates, along with a special gift pack. As part of its Corporate Social Responsibility (CSR) initiatives, ASGC partnered with Special Needs Future Development Centre (SNF) for the preparation of these gift packs. But what really made these gift packs special, was that they were prepared by other children, so what could be more special for a child than to receive a gift prepared by other child! Families also enjoyed the special activities organized around the children, such as face painting, balloon twisting games, Photo Booth with hilarious costume options, and a visit from Barney - the friendliest dinosaur ever. Furthermore, the fortunate staff members celebrating their birthdays in June, were congratulated by the management and got to cut the specially-prepared birthday/Ramadan cake with Mr. Emad Azmy, the President of the company.

Towards the end of the evening, there was still plenty of joy and surprise gifts to spread around, to the lucky winners of the Iftar Raffle, which was conducted by ASGC senior management.

In 2015 ASGC has reported a 160% growth in comparison to 2014. The annual turnover in 2015 reached AED 2.3bn, when in 2014 it was AED 1.4bn. Even more encouragingly, ASGC expects to achieve revenues upwards of AED3bn during the current financial year.

ASGC thanks all its employees for the attendance of the event and for making another successful year! Ramadan Kareem to all!